Rear End Shunt: How to claim the compensation for whiplash injuries and vehicle damage in a rear end vehicle road traffic accident

Discover what a rear end shunt is: see solicitor examples of who is legally at fault for rear end shunts and multiple collisions; discover the common type of injury and compensation amounts; find out what you should do immediately following a road accident and the importance of using a specialist solicitor to recover the maximum amount of compensation in your claim.

What is a rear end shunt?

A “rear end shunt” describes a type of collision between two or more vehicles in a road traffic accident in which one vehicle collides with the rear of another. Either when the front vehicle is stopped, such as at a junction or a set of traffic lights, or is travelling at low speeds – such as in slow moving traffic.

If a row of traffic is involved in a collision – multiple rear end shunts can occur. Imagine two cars waiting at a set of red traffic lights with a gap between each vehicle – when the rear end of the last stationary car is hit by a van pushing it forward into the vehicle in front.

Here two rear end shunts occur – the van shunts the last stationary car and that car in turn shunts the car in front.

Which driver is legally liable for your rear end shunt?

Generally speaking “legal liability” or “legal fault” for a rear end shunt lies with the colliding vehicle. In the UK the Highways Code sets out a safe distance which should be kept by all vehicles travelling behind others, such that even if you had to execute an emergency stop the vehicle behind you would have sufficient time to stop without causing a collision (rear end shunt).

If however multiple vehicles are involved in a collision the rules for establishing who is at fault can be more complex. 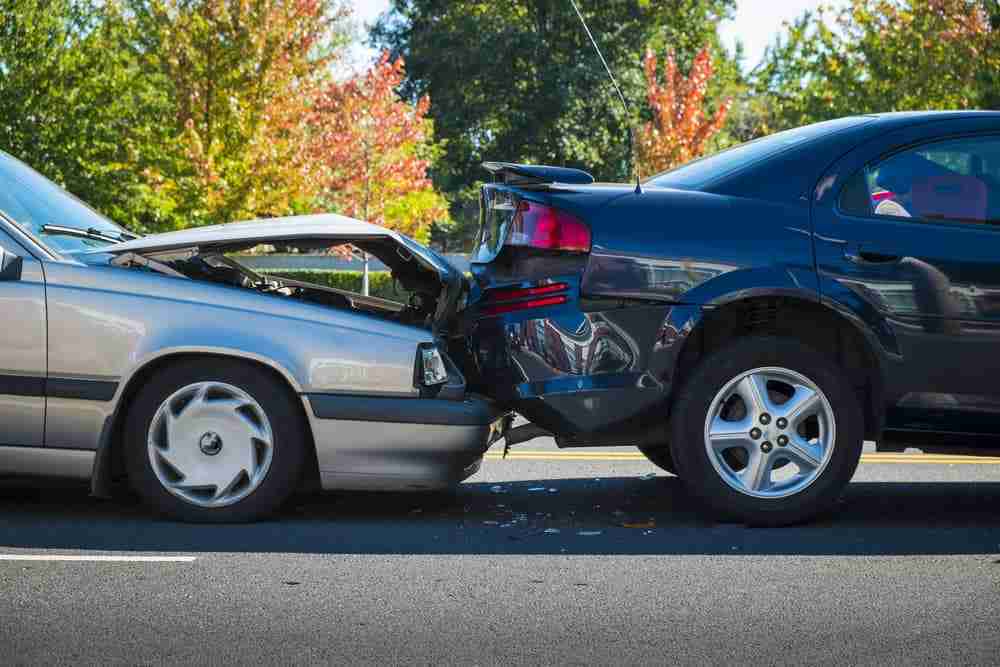 1. A line of traffic stationary at a set of traffic lights hit from behind by a moving vehicle

In this example – if your car is in the line of traffic (whether you are positioned at the front, back or middle) legal liability will attach to the moving vehicle that hit the rear of the line of traffic. All subsequent collisions and shunts should be met by that driver’s motor insurer.

2. Moving traffic when one vehicle has to slow or stop and multiple collisions occur behind

If you are driving your car either in slow moving traffic or within the speed limit on a road when you are forced to apply your brakes (for example – to avoid hitting a pedestrian who has stepped out onto the road) and as a result a your car is hit from behind as is the car behind you – who then is legally responsible for your vehicle damage?

This is a little more complex to establish who exactly is at fault, but one thing is for sure – you are not at fault as you reacted in the correct way to an unexpected road hazard.

Depending on the evidence of your particular accident – liability for your rear end shunt will either lie with the vehicle directly behind you, the other vehicle behind that or both the vehicles behind you.

What types of injury are you most likely to suffer in a rear end shunt?

The most common types of injury you could receive in a rear end shunt are those to your neck, shoulders and spine – whiplash is the name given to the neck injury caused when your head is whipped forward and backwards in a collision.

What should you do if you are involved in a RTA rear end shunt?

Following any road traffic accident in the UK, whether it be a rear end shunt or any other vehicle crash, you should take the same practical steps.

Click road accident claim to see the page I have written explaining the practical steps that you should take immediately following a road traffic accident.

Should you use a solicitor to claim compensation following a rear end shunt?

“Yes” – you should contact a specialist road traffic accident solicitor to claim compensation as this will enable you to resolve all the complicated issues of who is legally at fault.

Remember – claims for which legal fault is accepted by a driver can still lead to complicated issues needing a lawyer’s expertise. A specialist solicitor will ensure correct evidence is produced to support the maximum amount of compensation you are entitled to claim.