Road Traffic Accident Europe: How to claim compensation for a RTA in Europe using the courts in the UK 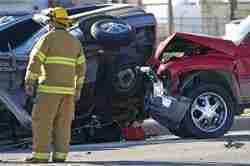 What type of road traffic accident Europe claim for compensation can you start directly in the UK?

There are several different types of European RTA claim that you can start directly in the United Kingdom some examples include:

1. You have a collision on a road in Europe and the driver at fault is a UK citizen or resides in the UK

In this example you can start your claim in the UK courts whether or not you are a UK national yourself. A car accident claim is the most typical example.

2. You are involved in a road traffic accident whilst in a vehicle which has been organised as part of a package holiday booked or purchased from the UK

An example of this type of RTA might include an accident on a coach whilst being transferred from an airport in Barcelona, Spain as part of your package holiday which you purchased in England. You can start this claim for compensation in England using the Package Holiday Regulations.

3. The person who was at fault for your road accident is not actually a UK citizen, but works in the UK

4. You may have had a road accident with an employee driving as part of a business. which has offices in the UK.

As the business has offices in the UK – you are entitled to start your claim in the UK.

5. If you are a UK citizen residing in the UK and you are travelling temporarily in Europe when you are involved in a road traffic accident

European law allows UK citizens injured in a road accident in an European Union country to commence a claim from the UK.

What law does a European road traffic accident claim started in the UK depend on?

To answer this question it is best to give an example.

Imagine you are a UK citizen on holiday in Spain. You fly to Madrid and on landing you decide to hire a car. A few days later you are driving to Barcelona when you have a head on collision – the other driver is English and driving on the wrong side of the road.

In this example, you can start your road traffic accident claim for compensation in England, but as the accident happened in Spain it is subject to the law of the land. In other words who is responsible is decided by Spanish law – as the claim is in the English courts Spanish law is introduced as expert witness evidence. This will normally be in written format and translated to English.

The judge will interpret the Spanish law and decide who was at fault and so legally liable. Spanish law will decide the limitation period – which is how long you have to start a claim before it is too late. In the UK this period is three years – Spanish law was likely to be very different.

Next the court must decide how much compensation is due – the judge uses English law to do this.

In summary, a road traffic accident in Europe (Spain) caused by a UK national is started in the UK and is decided by a UK judge using Spanish law to decide who caused the accident and UK law to decide how much the claim for compensation is worth.

As two countries’ laws are used this is sometimes known as the duality principle.

TIP If you have had a RTA overseas the time to make a claim can be much shorter than if you had your accident in the UK.

Can you still start a claim in the UK if your road traffic accident was caused in Europe by someone not from the UK?

“Yes,” there are two instances when you can start an overseas road traffic accident claim in the UK:

1. You do not claim directly in the UK courts, but use the Motor Insurers Bureau to help you claim against the foreign driver who was at fault using what is known as the green card scheme.

Under European law each motor insurance company must have a representative in each of the member states including the UK who is able to deal with a compensation claim in the language of that country. Under the green card scheme the Motor Insurers Bureau will locate that insurers representative and assist in you making your claim in English.

2. European law allows you to have claim directly against an insurance company in the event of an overseas accident

This is unusual – if you have an accident in the UK and you are a UK resident – you must claim against the driver at fault and his insurer will indemnify you only.

In the event of an overseas RTA you can claim against a driver’s insurer direct and in this instance you can start your claim in the UK – it may however be subject to the law of the land in which your overseas RTA occurred.

On this page you have discovered how to make a road traffic accident Europe in the UK when you are injured in a European country, how to start a claim directly in the UK courts if the person who caused the accident is from the UK and how to seek assistance from the Motor Insurers Bureau if the accident was caused by a European foreign national.

Click road traffic accident Europe to see all the steps to claiming RTA compensation in the UK.