Accident taxi: UK lawyer explains how to claim compensation for the different types of accident taxi drivers and passengers can suffer, who is legally at fault for each accident, how taxi drivers can claim vehicle damage and lost income together with how to receive free legal online help from a specialist solicitor.

What is an accident in a taxi claim?

An “accident in a taxi” claim is a claim for compensation for injuries (such as whiplash / hyper-extension neck injuries) as a result of a number of possible road traffic accident situations involving a taxi or cab. 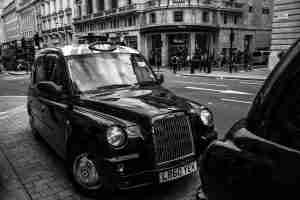 Taxis are known by many different names depending on the type of taxi licence and size of the vehicle – some examples include:

A taxi is a vehicle which carries a hackney licence.

The term “hackney” comes from a French word meaning “strong horse for hire” and is nothing to do with Hackney in London. The term hackney dates back to when horse drawn vehicles were the mode of transport for hire.

Taxis, or hackney carriages, are licensed by many metropolitan and local authorities.

Some stipulate that a purpose-built vehicle must be used (for example the a traditional “London cab” or ‘black cab’), whilst others may licence any vehicle they deem suitable.

Taxis may carry up to eight passengers if so constructed – typically London black cabs carry five or six.

Taxis may be hailed off the street, hired from a rank, or pre-booked.

The term “cab” comes from a taxi vehicle called a Unic, used in London pre World War 2 – these vehicles were Cabriolet’s and became known as cab’s. The name stuck.

Accidents in a taxi cab are the most common type of taxi accidents on the UK roads.

Private hire vehicles are commonly known as mini-cabs, which are technically neither classed as taxis or cabs.

Private hire vehicles must be pre-booked through an office and cannot be hailed off the street nor pick up passengers at taxi ranks.

The taxi driver must be pre-booked to pick up passengers and cannot be hailed on the street – failure to do so could lead to a cab driver’s motor insurance being invalid in the event of an accident.

Mini cabs can carry up to eight passengers, if constructed to do so.

What are the most common types of accident in a taxi?

Some of the most common types of road traffic accident in a taxi, include:

1. Taxi collision with another vehicle due to other driver’s error

If you are a driver or passenger in a taxi when the cab is hit by another vehicle and the accident was the fault of the other vehicle driver – you are entitled to claim compensation for any injuries caused and any financial loss incurred, including vehicle damage and lost income.

If you are a passenger in a taxi, which is involved in a RTA caused from a driving error by your cab driver – you and any other taxi passengers are entitled to claim compensation from your taxi driver and in turn his motor insurer.

The taxi driver – cannot claim for his own injuries, but if he has comprehensive motor insurance he would be entitled to have his taxi car repaired or replaced by his own insurance company.

3. Passenger injuries made worse by failure to wear a seat belt

Passengers in a taxi are entitled to claim compensation from whoever caused the road traffic accident – as a passenger is not in control of a vehicle the RTA can’t be considered a passenger’s fault.

If you are travelling as a taxi passenger you should take care of your own safety by ensuring a seat belt is properly secured. If a taxi crash occurs when you are not wearing a seat belt you are still entitled to claim compensation, but the amount of compensation you receive can be reduced by a percentage for what is known as contributory negligence. The maximum deduction for contributory negligence from failure to wear a seatbelt is in the region of 25%.

4. Passenger injury from a taxi skid

If you are a passenger in a taxi which skids as a result of ice or due to a sudden need for the driver to brake and as a result you are injured – you should be entitled to compensation from the taxi driver for any injuries, such as whiplash, you might suffer.

If a taxi is hit by a vehicle, which does not stop – this is known as a hit and run or an untraced driver RTA. In such an accident in a taxi – compensation can be claimed by the taxi driver and the passengers from the Motor Insurance Bureau (MIB).

Taxi drivers must ensure passengers are not injured by erratic driving – should injury occur by unsafe driving the taxi driver can be held legally responsible for injury.

”Yes” – so long as the accident was caused by the fault of another driver.

Your solicitor will need access to your books and accountant’s reports, if you are a self employed taxi driver, to prove how much income you typically earn.

Alternatively – if your cab is off the road whilst being repaired you might be able to claim the cost of the rental of an alternate taxi so you can continue earning an income.

What should you do in the event of an accident in a taxi?

As either a passenger or a driver involved in accident in a taxi – you should contact a specialist RTA solicitor as soon as possible.