Will I have to go to court to claim compensation?

Go to court: I was in a car with two friends waiting at the front of my house, when suddenly our vehicle was hit from behind. We took the driver’s details who admitted liability, but later disputed that there were passengers in my car.

The solicitor acting on my behalf has taken statements from my friends and I, but I wonder if we will need to go to court or whether my solicitor will go to court on our behalf, so that we can all recover compensation for our injuries?

Accident Claim Solicitor Response: To understand if you will need to go to court you should take into account the following considerations:

1. Your solicitor may need to start your compensation claim in court

Quite often claims for compensation settle without the need to go to court, but if the facts of an accident are disputed, and the other party or his insurer will not make an offer to settle, it is likely your solicitor will need to start your claim at court.

Click motor vehicle accident to read the page I have written explaining how your solicitor can start a compensation claim in a road traffic accident claim.

The fact that your solicitor starts a claim does not mean that you have to give evidence at court.

2. Only at the end of the court process is there a trial

There is a lengthy court process that must be followed before a trial of your claim can take place. The witness statements you have described and all written evidence will be before the court and both parties’ legal representatives. 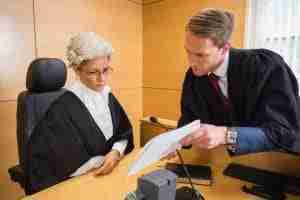 It is very likely that the written evidence will be sufficient to prove your claim and result in an offer of settlement being made. Very few claims actually end in trial in the UK.

If the claim does not settle – the last stage in the court process is a trial and it is at this stage that both parties will call witnesses to give oral evidence to the court. This is what you will most likely mean by “go to court”.

The witness evidence is based on the statements already prepared, but the other party’s barrister will have the right to ask direct questions of you in cross examination.

I repeat that this is very unlikely however as the cost of such a trial can be quite expensive and as the written evidence should be clear as to the true facts of the accident it is likely the legal representatives for the guilty party will ensure extra unnecessary court costs are avoided and effectively force a settlement.