Mini Roundabout Accident Liability: The court process to win compensation for whiplash injuries following a collision on a roundabout

Mini roundabout accident liability: Find out in a question and answer session how to show liability for an accident on a mini roundabout involving a car and a van leading to a crash causing whiplash, neck and back injuries.

I had an accident earlier this year. A van hit my car from the back side on a mini roundabout. The van driver cut across the mini roundabout which led to the collision. 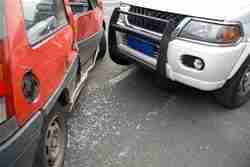 I suffered a whiplash type neck injury and a banged head and my brother who was a front seat passenger injured his lower back / lumber spine. I took the details of the van driver and his registration number.

I have submitted this case to a road traffic accident solicitor who chased the van driver to admit liability. I have been advised by my solicitor that the third party denied any involvement in this crash and my solicitor gave me advice that my claim would have to go court.

I would like to know the court procedure I would be involved in if I went to court, how long it is likely that it will take for my claim to be over and whether I will have to give evidence at court?

Liability for your roundabout accident seems quite clear cut as the van driver collided with the rear of your car having cut across the mini roundabout. The Highway Code is clear that a vehicle must travel all the way round a mini roundabout and not cut across it. An exception is for large vehicles, such as lorries or buses, that might have no alternative, but to mount the roundabout due to the vehicle’s size. It would be very unusual that a van would be too big to be unable to properly go around the roundabout.

In any event you were hit from behind, which strongly suggests that the RTA was the van driver’s responsibility.

It seems the third party – which I presume refers to the van driver or his motor insurer have not accepted involvement in an accident at all. I think involvement would be easily proved from the fact that you engaged with the driver taking his details and registration number so you would likely be able to give a physical description. In addition to your witness evidence there should be crash damage on both the van and your car proving the mechanics of the crash.

It is quite common that claims must be issued in court to enforce your right to receive compensation for your vehicle damage, whiplash neck injuries, banged head and your brother’s lumber back injuries.

Once issued at court the third party must file a Defence. If a defence is not filed your solicitor will enter judgment in default which means you have won your claim. If a Defence is filed at court – your claim will allocate to a court track. It is likely if you have suffered whiplash injuries the track will be the fast track setting an approximate 6 month timetable to a final trial date.

I think it very unlikely that your claim would have to go to trial and it is only at the trial stage that oral evidence is necessary. Prior to trial your solicitor will submit your witness statement and the third party must disclose a statement too.

Very few RTA claims go to a final trial hearing –and I suspect your claim will settle in a few months after your solicitor has served court proceedings.