Roundabout Accident Claim: How to show which driver is responsible for paying compensation for a road traffic crash on a roundabout in the UK

What is a roundabout accident claim?

If you were involved in a car crash or a collision between other vehicles including: trucks, motor bikes , pedal cycles which occurred whilst negotiating a roundabout or on entering the a lane on a roundabout you might be entitled to make a claim compensation for your vehicle damage and injuries sustained (such as whiplash or back and neck injuries).

Such a compensation claim can be known as a “roundabout accident claim” and is sometimes through misspelling referred to as a rounderbout claim..

A roundabout accident claim can only be made if you can show that the other driver was at fault or negligent for the crash.

How do you know who is liable for your roundabout accident claim?

To decide who is liable for a roundabout accident claim the following considerations should be taken into account:

1. Refer to the Highway Code

The Highway Code currently sets out the ”rules of the road” for drivers using a roundabout in Rules 184 to 190, including: what motorists should do when approaching a roundabout, mini roundabout or multi roundabouts; the signals that should be made on approach, whilst changing lanes and exiting; the priority of vehicles on the roundabout; lane selection in accordance with road markings, the requirement for extra care in relation to cyclists and pedestrians, speed and observance of other vehicles.

The Highway Code will allow you to know on paper who is responsible for roundabout accident claim.

2. Availability of evidence to prove what actually happened

Even though you might be certain as to how your roundabout crash happened – if liability is not accepted in writing by the driver you hold at fault or his motor insurers after your roundabout accident claim is lodged, you have to be able to prove what happened. 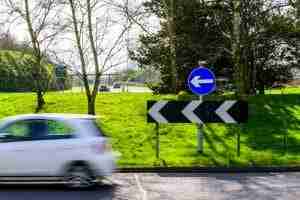 All too frequently – a driver will accept fault at the scene and later deny responsibility for the crash and even lodge a claim against you. So remember no matter what the other driver tells you at the scene – ensure you have as much independent evidence as possible which can verify how the accident occurred.

The very fact the driver at fault knows you have gathered this evidence will make it less likely he will change his tune at a later stage.

The evidence you should gather includes:

a) Details of other drivers or pedestrians who witnessed your RTA – jot down names, contact details and what they saw.

b) Observe whether any CCTV evidence is in the area and could have filmed the crash – if so act quickly to contact the council or other authority to get a copy. This information can be destroyed relatively quickly if not obtained.

c) Jot down a plan of the accident scene – you might be surprised how quickly you can forget the scene and positioning of vehicles.

d) Contact the police – it is a good idea if you are suspicious about the other driver or personal injury has occurred in the accident to ensure the police attend at the scene to compile a report and take evidence and photos all of which can be referenced to prove liability for your roundabout accident claim .

e) Jot down the points of impact on the vehicles in a small sketch.

f) Take photos of the vehicle damage and roundabout layout and any skid marks.

g) If the other driver accepts fault at the scene – ask the him to write this acceptance out in his own hand and sign it.

h) Always take full details of the driver at fault, including a registration number and motor insurance details. If you have a camera take a photo of him and his vehicle.

i) If the roundabout accident claim was in a residential area – knock at a few houses to see if anyone witnessed the crash and take down the details of anyone who did,

What should you do if you think you might have a roundabout accident claim?

If you suspect you have a roundabout accident claim then you should act quickly and contact a specialist road traffic accident solicitor. Roundabout accident liability is notoriously tricky to prove and the sooner a solicitor is involved the better your chances of success.

Click motor vehicle accident claim to select from my free specialist solicitor online help my website offers or to request a free call back from me in person to discuss liability for your roundabout accident claim.