Handbrake Motorway Collision: When can you claim compensation for an accident caused by a driver stopping wrongly using the handbrake

Find out in a Q&A when can you claim compensation for injuries and vehicle damage caused when a driver uses the handbrake on the motorway causing a collision.

I was in a van pulling away at a green light on a motorway roundabout in Birmingham when the driver of the car in front pulled the handbrake on of his car which resulted in my van hitting the back of his car – even though I kept a reasonable distance.

There was no reason for the car in front to stop whilst in a live lane with no cars in front of it at the time when it was just accelerating leaving a set of traffic lights.

The car driver said that it was his fault due to not knowing how to drive an automatic car yet as he purchased the car the same day and slammed his brakes on.

My motor insurer are suggesting we accept liability as my van was behind and hit the car in front. I have dashcam footage that shows I had kept a distance and followed the flow of traffic before the car in front came to a complete stop for no reasonable reason.

Both my passenger and I suffered whiplash neck injuries.

Can we claim compensation for the collision as I believe the driver in front used his handbrake and apologised at the accident scene?

It is often the way with a road traffic accident that the driver at fault may say something at the accident scene, but provide a very different version to their own motor insurer when reporting the collision.

In any event – saying that the driver was unfamiliar with an automatic vehicle is not in itself sufficient to prove liability as a matter of law. It is for you, as the potential claimant, to prove that the car driver was legally at fault.

In your description there is something very significant – namely you are alleging that the car driver used his handbrake. If this was the only brake that was used the brake lights on his vehicle would not be showing.  If however he used both his parking brake and the foot brake – the braking lights would show. Presumably your dashcam footage may give some evidence on this point.

The absence of brake lights can affect the reaction time of the driver of the vehicle behind – not realising immediately that the car is braking directly ahead.

The absence of brake lights can have particular relevance to motorway collisions as speeds are high and reaction times of the following driver can be more significantly affected than on a normal road..

However, given the accident happened as you were pulling away and you were both accelerating you would still likely be able to quickly realise the vehicle in front was slowing and you would in turn stop accordingly. It is unlikely your reaction time would have been seriously compromised. 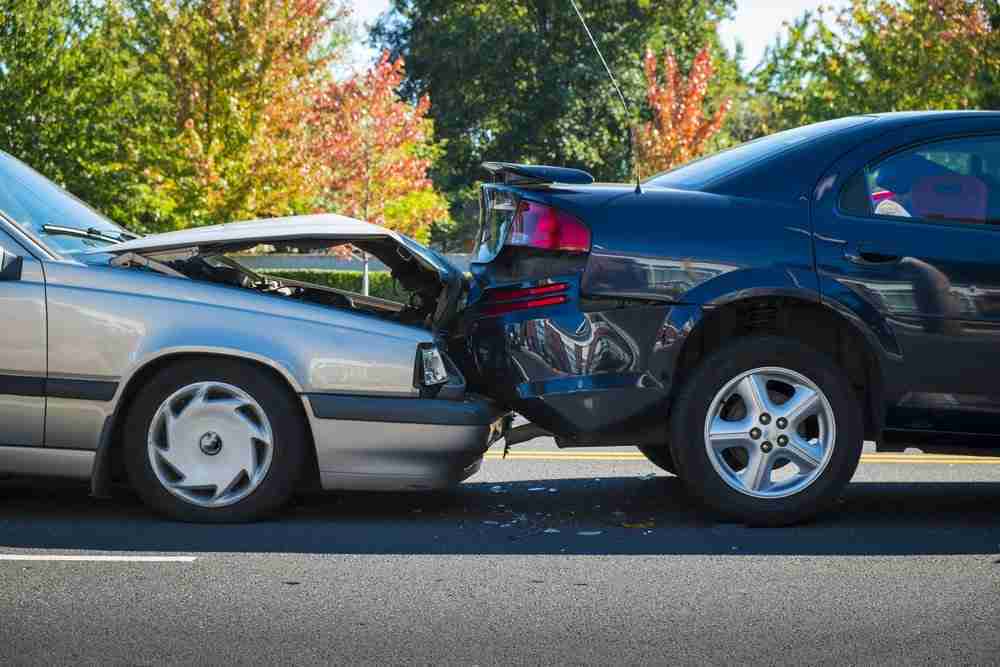 If the same accident happened in a motorway lane when the speed of the vehicles was established and a vehicle in front stopped suddenly without the brake lights showing resulting in a collision, there could be an argument that the driver in front was liable in full or at least in part for the accident.

You must remember that typically the foot brake is a hydraulic brake applying to all four wheels and is very powerful and will stop the car very quickly. The brake light will illuminate when this brake is used. The hand brake / parking brake typically applies to the back two wheels only, is far weaker than the foot brake (typically a car engine will be far more powerful than the parking brake), it is cable operated and does not show the brake lights.

In other words – if only the handbrake was used the car would likely stop slower than if the footbrake was used.

Your insurers are however correct that you must keep a safe driving distance from the vehicle in front of you and have sufficient distance to stop should that vehicle stop suddenly for whatever reason as required by the Highways Code Braking Distances.

To recap – you would have to prove your claim with evidence. You would need to prove that no brakes lights showed (presumably this would be evident on your dashcam), the car driver used the handbrake only, the car stopped so suddenly that your reaction time was compromised that what was ordinarily a safe braking distance was insufficient.

Standing against you would be that you the safe braking distance should be sufficient even if the brake lights did not show as the handbrake is a less powerful brake than the footbrake (soo the car would slow at a reduced rate), it is difficult to overcome the presumption that whilst  you are accelerating at a motorway roundabout your attention would be very much attuned to the vehicle in front and as such it is likely that you would fail to realise it was stopping for whatever reason.

Exception – if it could be shown that the catr driver had deliberately used the handbrake to cause an accident fault would lie with the car driver and any claim he may attempt to make himself for personal injury could be considered fraudulent.

You have indicated that both you as the driver and your passenger suffered whiplash neck injuries.

As the driver you would only have a claim for personal injury, vehicle damage & financial loss from the car driver in front if he was legally at fault.

Your passenger would have a claim for whiplash neck injury / personal injury from the driver at fault, whether as a matter of law that is yourself or the car driver in front (or both you and the car driver, such as a split liability 50/50 claim).