Accident Child Claim: How to win compensation for a UK accident involving your child despite your child trespassing on another’s property or land

Accident child claim: Find out when an accident occurs how your child can still claim compensation despite being considered a trespasser in the eyes of the law – several examples are given.

When is a child a trespasser?

A child is a trespasser when he enters onto land without the permission of the owner.

If an accident occurs to your child whilst on land uninvited can you still claim compensation? 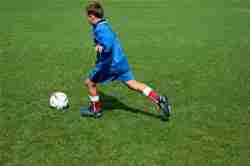 “Yes” – there are certain circumstances when an accident occurs that your child can claim compensation from an “occupier” of land even if your child was technically trespassing at the time.

An “occupier” is the owner or person in control of the land.

An “allurement” is something that will attract a child onto the land.

1. Imagine you are visiting a stately home with your family which has a play area for young children. The play area is separated from a wood by a small picket fence approximately half a metre high. The wood has trees and bushes with red berries on them. Signs on the fence clearly state “private land do not enter”.

Your son is five years old and you let him use the play area with the other children. You are sitting nearby having a coffee so your son cannot leave the area without you seeing.

He suddenly runs out looking very pale and you discover that he had reached over the fence to a nearby bush on the private land and eaten some berries. It turns out that the berries are poisonous.

Even though your son was technically trespassing by reaching onto the private land – it is very likely you will have a compensation claim. It should have been obvious to the stately home owners that young children seeing red berries would be attracted to them and try and get hold of them. The red berries were an “allurement” and the stately home should have built a much taller meshed fence around the private area so that no young child could get onto the land.

2. Imagine you reside in a neighbourhood where lots of young families live close to the local school. Building works are taking place nearby and a large area is fenced off with signs saying no entry. The fence posts however leave a gap big enough for children to squeeze through which a group of local kids do – one of which is you 10 year old son.

Whilst playing hide and seek on the building site your son cuts himself on some sharp metal foundations – he is left with a scar which will remain for the rest of his life.

Anyone who has children will know that a building site is an “allurement” to children. Most young children like exploring new places and would see a building site as a potential playground.

The owners of the land or the building company should have realised that children played nearby, but the fencing was not adequate as it left a big enough gap for a child to squeeze through. The owners also knew that a building site was a dangerous place especially for children.

It is likely that a claim for compensation would be successful against the builders or owner of the land.